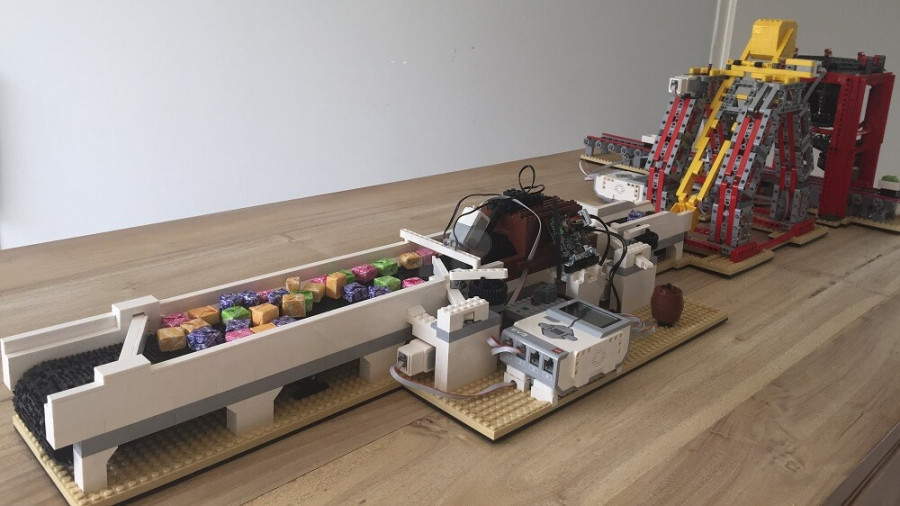 We think LEGO® is the best toy in the world. Firstly, LEGO® is fun for both children and adults. In addition, LEGO® is educational and stimulates the imagination. Finally, LEGO® is suitable for building individually, but also for building with friends or colleagues. All this comes together in this new episode of meet our fans. We interview Hans Odenthal from the Netherlands who works with his colleagues from Sioux Embedded Systems on the largest, fully automated train track in the world. This train track picks up sweets and also delivers them automatically.

ToyPro: How did your colleagues and you get the idea to start a group for building with LEGO® Mindstorms?

Hans: At our company (Sioux), knowledge development is very important. Certainly in software there are always new developments going on. That is why every employee has his own training budget to keep up with the latest state of affairs. In addition, Sioux has the so called pizza budget to work with colleagues on knowledge projects in the evenings. I had built a simple train station myself for which I used the programming language C# (part of Microsoft.NET) and Mindstorms NXT to run a LEGO® train. At that moment it was no more than an oval with signposts, where the train automatically stopped for a red signal. I then made a call within our company for who would like to start a knowledge group to continue on my train track. There were immediately 10 enthusiasts and November 2011 was the birth of our group. The name Sioux.NET on Track is a reference to the programming environment .NET and the LEGO® train track.

Team Sioux.NET on Track at LEGO® World 2013 in Utrecht.

From experience, I know that there is a risk that you will start working on everything in such a group, but ultimately nothing will be delivered. To prevent this from happening, we have set ourselves the goal of working towards an objective each year and showing our project at LEGO® World in the Netherlands. To make the train track attractive for children, we have added the sweets and all kinds of structures that, as we always call it, have a 'WOW' effect on the children. One of the examples I would like to mention was a tilting mechanism to drop the candy out of the car.

Since 2012 we have managed to participate every year in LEGO® World and we have demonstrated an even more beautiful train track every year with even more possibilities. The latter is made possible by the software written by our team. By showing our project at LEGO® World, we immediately work on one of our company's social goals, namely promotion of technology for children.

Unfortunately we have just been told that we can’t join LEGO® World 2018. So we are going to see what the alternatives are. Maybe it's time for your own LEGO® World in the Brainport region, organized by Sioux and ToyPro?

ToyPro: What makes building with LEGO® so much fun for you?

Hans: I have to divide your question into two parts. Because 'building' has two meanings in this case. Some of the colleagues have dedicated themselves to building with LEGO®, the others are building the software application in the programming language C#. When building this application, we use all kinds of new techniques to make the software as good as possible. Given the nature of this article, I do not go into it too deeply now. But believe me: you need a solid study to be able to work with this.

As far as the LEGO® is concerned, it is first of all a challenge to get everything working. But it is also important that it is sturdy and able to be transported in parts too, that it can continue to run for a number of days without having to replace everything and (of course) that it looks beautiful. Although LEGO® can’t be compared to the projects we are working on in our company we sometimes encounter similar problems: do I solve the problem mechanically or do I change the software? Or, how do we ensure that the software 'knows' whether a certain component is in the correct position? Because if you do not take this into account, it can literally result in gears coming to a grinding halt. And that also means that the entire demo will come to a standstill, resulting in dissatisfied visitors.

Taking all these aspects into account makes it so fascinating. And of course, the highlight is LEGO® World. Children always are honest, so if they do not like something, you'll immediately hear that. Up until now we have seen mainly smiling faces and it is great when you hear "This is the best thing I have seen today". Some children also come back several times and then you know that you have built something beautiful. The parents are particularly surprised that you can make something like this from LEGO® and are especially curious about the technology behind it. It is of course great to see how all these different parts work together like a well-orchestrated orchestra. For the children it is magic, we know that it is the software.

ToyPro: How do you get inspiration and how do you find solutions to issues?

Hans: When we come back from LEGO® World, we always plan a meeting to look back on the past year. As in our real projects, we ask ourselves "What went well, what could be better?". We all have an intrinsic drive to do better and better.

An example of the past year was that the gears of the delta crane were completely broken. Logically afterwards, when you consider that the crane arms had to be used more than 5000 times. The crew of that day had found an ingenious solution to continue with the job. But it was not a permanent solution and we have fixed that. The software also shows things that can be improved and we put all those things on our to-do list. In addition, we said: every building may last 2, at most 3 years, and then have to be replaced by something else. By adding this condition, we are sure that the train track will look different every year.

Part of the inspiration also comes from setting sometimes almost impossible goals. In practice, you don’t achieve these goals most of the times, but you always shift a little with what is possible. For example, at first we did not think it was possible to make an automatic candy sorter. But we did succeed and that gives a good feeling. 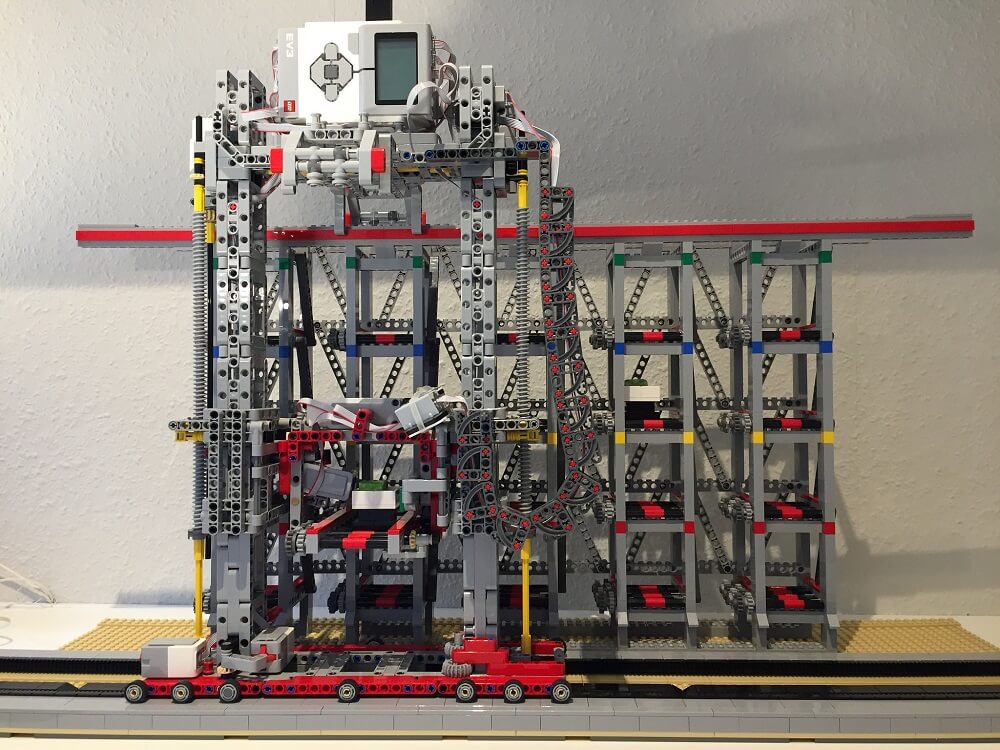 ToyPro: Do you only use LEGO® parts or non-LEGO® parts as well and if so, why?

Hans: We only use LEGO® parts or products from companies approved by LEGO®. For example, we use a Pixycam camera with an adapter from Mindsensors. This camera is needed to detect the colors of the candy. The color sensor of LEGO® is not suitable for this. But we do not alter LEGO® blocks or print something. That is a condition that we have imposed ourselves on in order not to make things too easy for us. And believe me, it has happened more than once that a relatively simple solution was available if we wouldn’t stuck to that condition. Remaining true in those situations to your own starting points and finding a solution, that gives a real kick.

Hans: Up to now, the project has become slightly bigger every year. We already have quite a few buildings and the train has to drive between the various structures. The current size of the complete track is about 9 by 4 meters now (or if that says more: a base plate of 1200 by 550 dots).

A large number of children who visit our project at LEGO® World calls our train track "a candy factory". And that is a good name, because for the children it looks like a factory where sweets are made.

Basically it comes down to the fact that it starts with choosing a color. We already had a lot of different devices for this, this year it is a 'Wheel of fortune' that the child gives a twist to. The wheel stops on one of the colors red, yellow, green or blue, and those colors correspond to the four types of sweets. Numerous children can choose their color in succession and everyone gets a (train) ticket with a number on it. With that number they can follow where their candy is in the handling.

The train with four wagons drives to a crane where the wagons are filled with the candies in the right colors. The train then drives to the station, where the four sweets are delivered in four lockers. On a large screen you can see which candy is up and whether it is ready to be picked up from the safe. With the ticket that the child has received, he can open the safe where his candy is located. All in all, it takes a few minutes and there is plenty to see on the track. The sweets are automatically sorted and stored in a large, fully automated warehouse. Just like in a real factory, it never stands still.

In the following video you see the train track that we demonstrated at LEGO® World last year in 2017. We were present for four days and more than 1000 visitors at our stand have received a candy with our train.

ToyPro: Do you have tips for others who build with LEGO® Mindstorms?

Hans: My main tip for those who build with Mindstorms: do not give up too quickly. Learning to program takes an effort and I have regularly seen that children give up hope too quickly if they do not succeed immediately. Ask someone who understands programming for help, because once you get to work, then I know for sure that you do not want anything else.

For the parents, my most important tip is: do not start too soon. I have often heard parents say "my 7 year old child can already build a Technic box of 12+". But building with physical blocks is very different from abstract thinking from programming blocks. If you start too early with Mindstorms, the child will have a negative experience and will not dare to do it later.

A tip that I want to give to parents who can’t program themselves: ask someone for help who can. I often hear this group of parents that 'they find technology too difficult' and thereby unconsciously send a negative signal to their children. Too bad, because technology is great and LEGO® Mindstorms can help very well.

Hans, thank you very much for your time and extensive information. I think that you are an inspiration not only for us but also for many readers. Too bad you are not at LEGO® World 2018. We hope you will find a nice place to show off your impressive, candy-sorting train track.

Have you been inspired to build your own LEGO® Technic MOC? You can find all the parts you need on our LEGO® Technic parts and LEGO® Mindstorms parts page.